We have worked hard to ensure we have a Covid-19 safe environment for both our staff and customers, and as required by law we have undertaken a Covid-19 risk assessment and put in place a simple one way system and a queuing system at the bar. Customers will now use the fire escape to enter the building, moving through the Marland Room and down the corridor into the bar, where you can purchase your drinks using a contactless card. There is no seating within the bar area whilst we continue to evaluate the situation and only 12 seats on the balcony, therefore, if there are no seats available on the balcony you must take your drink outside using the main entrance stairs as the exit. The only toilets that will be open are upstairs and we can only allow 1 person in them at a time.We look forward to welcoming you back.

Due to the ongoing Covid-19 crisis the Board have taken the decision the postpone the A.G.M. from its usual date sometime in June, until the 10th September 2020 at 7:00 pm in The Marland Room.

Following an emergency meeting held on 17th March, the committee have decided to close the Clubhouse from Friday 20th March. This will probably last until the end of social distancing or until the Government reverses its advice for the public to refrain from going to pubs, clubs, theatres and other such venues. Hopefully this will not last too long and we can all get back to normal.

The decision was based on the fact that since the Government’s advice on social distancing, apart from two funeral receptions and a couple of parties next month, we have had every one of our bookings in March and April cancel. In addition to that the Hockey club have cancelled all of their training and fixtures and the Cricket club has postponed the start of its season.

It was decided that we should keep the Astro open and available for hire, so if you, or anybody you know would like to use the facility for any form of exercise please contact the Club on 01722 327108 or office@theclubhousesalisbury.co.uk

We wanted to let all of our members and customers know that unless we are instructed otherwise by the Government it is very much business as usual here at Salisbury and South Wilts Sports Club.
We would like to let you know what we are doing to keep our customers and staff as safe as can be during this rapidly developing situation.
Last Friday’s press conference provided new information on the government’s strategy and how the experts expect the epidemic to play out. At this stage, the current advice is broadly to carry on as usual, but take sensible steps to reduce the risk of contracting or passing on the virus. With that in mind, this is how we are responding as a business.
– Staff have been instructed to raise our already high levels of cleanliness, up several notches so we become obsessive about cleanliness.
– Staff have been instructed to frequently and thoroughly wash their hands throughout their shifts. Likewise, they will be sanitising and cleaning all equipment and surfaces constantly.
– They have been asked to pay special attention to the washrooms to ensure there is always plenty of soap.
– Staff have been told not to come to work if they display any of the symptoms – we would encourage our customers and members to do likewise.
– We have established a dedicated team within the business to consider further steps we can take to ensure the health and safety of our customers and team members come first.
It goes without saying this is a tricky time for us all. We will constantly monitor the situation and review how best we should respond over the coming weeks. We will make further contact with you all should anything change.
Your support and custom during these testing times is very much appreciated. We promise you that we’ll repay your loyalty by doing everything in our power to provide a clean, safe, enjoyable venue for you should you choose to visit us.
Kind regards.
Gary & Nita

Every 3rd Thursday of each month, starting on 20th February, we will be holding a relaxed evening with food and drink. Each month will see a different food offering, with the first one being Fish Chips and Peas.

Priced at only £8.95 per head which includes a pint of beer, a medium glass of wine or a soft drink, this is great value for money. So if you’d like to save on the washing up at home and spend a couple of hours socialising with your friends and family then why not give us call or send us an email to book a table.

Food will be served between 6:30pm and 8:00pm We do hope you’ll support us with this new event, and we look forward to receiving your table booking

So if you have a Heart Condition, High Blood Pressure
Suffer from Diabetes or C.O.P.D

Please come and join us 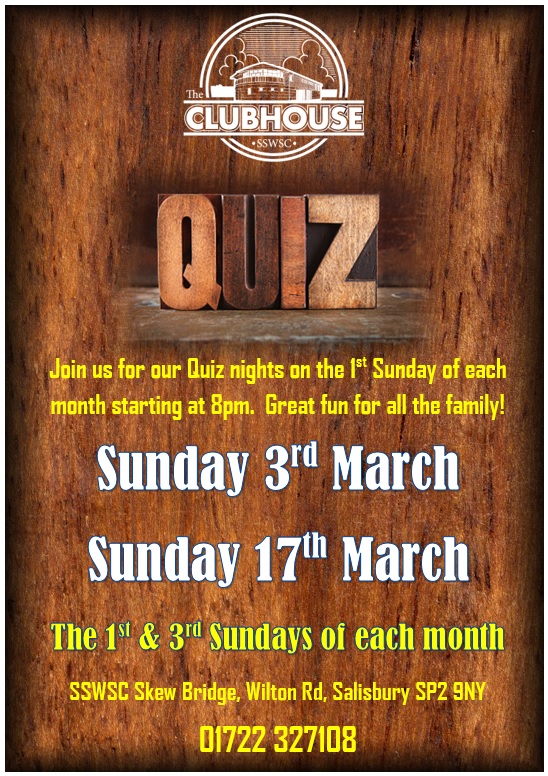 Our quiz nights takes place on the first and third Sunday of every month and starts at 8:00pm.

Why not come along and test you general knowledge in a relaxed and fun quiz.

The New Clubhouse Website is now live.  We have so much going on over the next few month. Keep checking into the website with all the latest news and events!